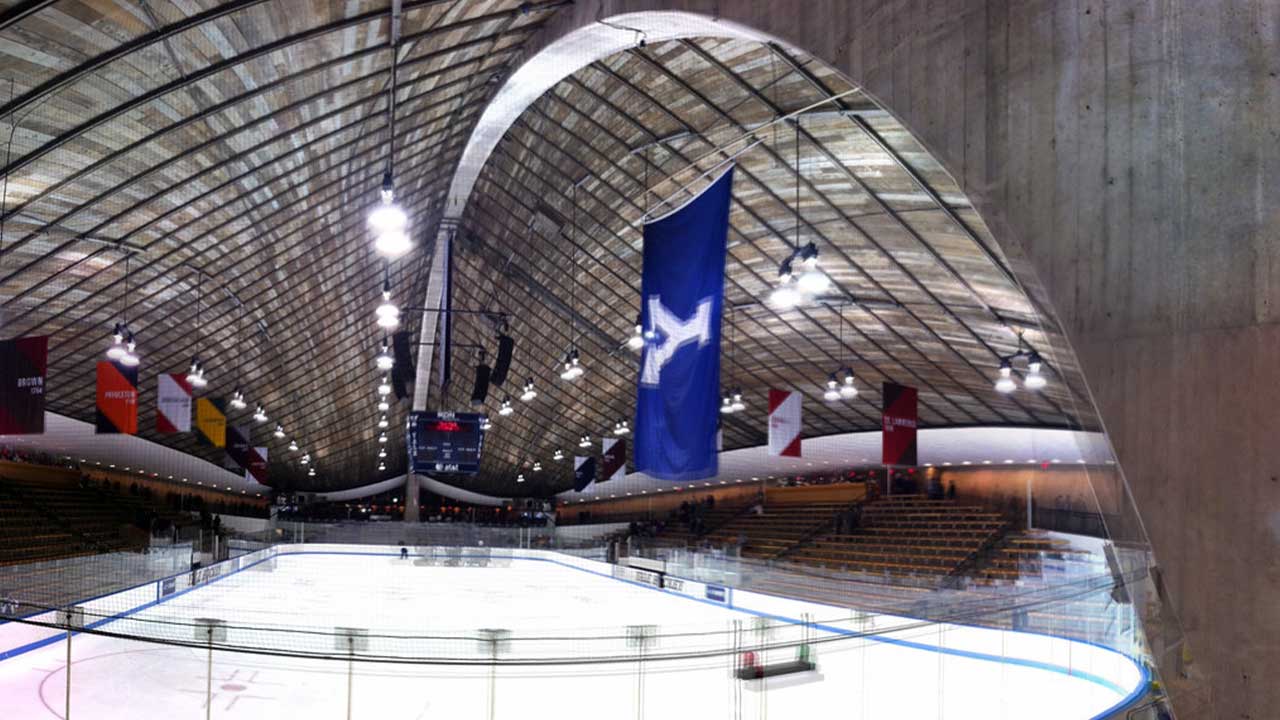 Where In The World Can You Find The Most Interesting Hockey Rinks?

Ice arena design around the world has been inspired, and continues to be inspiring. Let’s have a look at a few of the best:

Known as the “Yale Whale”, the Eero Saarinen designed building is one of the most distinctive rinks in college hockey.

Calgary needed a new arena in 1980 with the Winter Olympics set for 1988. Graham McCourt Architects designed the arena with the goal in mind of pillar free viewing from any seat in the house. Because the ingenious design resembles a saddle, the “Saddledome” remains the world record holder for the longest spanning hyperbolic paraboloid concrete shell.

The foot of Pyrenees in Spain is the backdrop for a very modern interpretations of an ice hockey rink. The arena mimics a drop of water falling from the mountains as the building appears frozen on the ground thanks to exclusion of a visible facade.

The dome membrane keeps all the elements inclusive such as the structure, roof, lighting, security and air conditioning systems, as well as the divisions of space within the arena.

The Globe in Sweden is the biggest hemispherical building in the world with a diameter of 361 feet and is the coutry’s national indoor arena.

It closely resembles an oversized ping pong ball but also represents the Sun in the Sweden Solar System. In 2010, a funicular was added along the outer of the globe to give tourists an unrivalled view of Stockholm.

The Vaillant Arena was once an open ice rink. In 1970, the first attempt to cover the rink began using wooden pillars and sections of timber to form a vaulted dome celling. It was finally finished in 1979.

Glass panels were added in 1982 to fully enclose the arena. Additional modern elements have been added throughout the years, but Vaillant remains the perfect venue to pray to Lord Stanley thanks to the Basilica-style ceiling and seating.

Thanks to its unique design, he Latvian capital of Riga earns a place on this list despite being a multifunctional facility. The structure uses varying heights as to not full interfere with the surroundings as well as enclose an existing shed.

The building is covered in polycarbonate that is sixty percent transparent allowing outsiders to watch the game. The hall also illuminates the surrounding area thanks to the interior lighting and bright ice.

Like Vaillant Arena in Switzerland, Gutterson embraces visible wood in its construction. The barrel-vaulted arena is impressive and the warm wood paneling that arches overhead only adds to the traditional atmosphere of the rink.

Being the largest indoor arena in the state, the Vermont Catamount ice hockey games almost always sell out. An ideal place to get a local college town experience.

The Utica Memorial Auditorium, known locally as The Aud, was the first arena of its kind to use a long-span cable structure only seen in suspension bridges up to that point.

It uses two layers of cables an outer ring that best resembles the spokes on a wheel and is exposed in the arena for an interesting view. While professional hockey left The Aud in 1993, it’s still home to the Utica College Pioneers.

More rinks were a necessity when Norway was awarded the 1994 Olympic games. With half of the country covered in mountains and rocks, the Norwegians chose to embrace their heritage and build the newest rink into Hovdetoppen mountain. This made it the world’s largest cavern open to the public.

Instead of dwarfing the landscape, the architects designed all nine stories of building underground.

Improvements like a scoreboard, better lighting and locker rooms were added over time but essentially, the architecture remains a tribute to traditional hockey barns of eras passed.